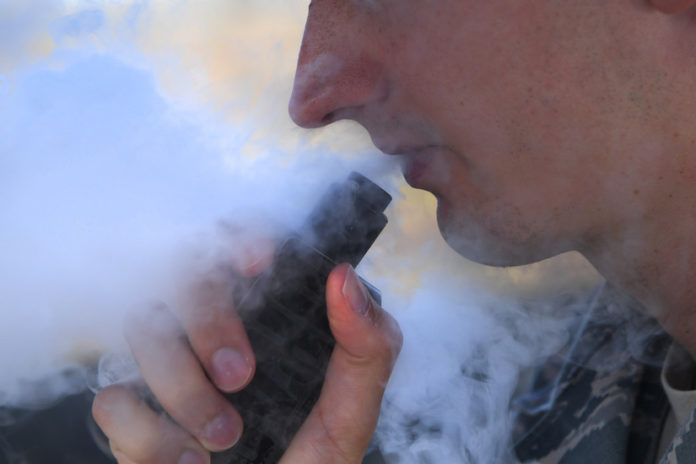 Centers for Disease Control and Prevention statistics report that 1,299 lung injury cases and 26 deaths are related to e-cigarette or vaping product use.

Vape products, including e-cigarettes, vapes and e-hookahs, are electronic nicotine delivery devices that heat a sometimes flavored nicotine-infused liquid into a vapor that users inhale. In recent months, there have been reports of illnesses and deaths that are believed to be associated with the use of vape products.

“The vapor that users inhale can contain ultrafine particles, carcinogens, volatile organic compounds and heavy metals,” said Public Health Service Capt. Kimberly Elenberg, director of Total Force Fitness for the undersecretary of defense for personnel and readiness. “Vaping is not harmless, and researchers are still trying to understand the long-term impacts and health effects from inhaling the vapor.”

“Vaping is not harmless, and researchers are still trying to understand the long-term impacts and health effects from inhaling the vapor.”

– PUBLIC HEALTH SERVICE CAPT. KIMBERLY ELENBERG, DIRECTOR OF TOTAL FORCE FITNESS FOR THE UNDERSECRETARY OF DEFENSE FOR PERSONNEL AND READINESS

NEXCOM officials said Navy exchanges carried two vape-related products in the tobacco sale area of their stores. Those products, “e-cigarettes,” have been removed from shelves.
Additionally, NEXCOM directed Navy Exchange concessionaires and vendors to discontinue the sale of vaping products in any NEX location.
AAFES officials said their stores’ offering of vape-related products already was limited, and that its exchanges had already stopped offering flavored vape liquids because of Food and Drug Administration concerns with the appeal of the products to underage customers. By the end of September, AAFES had removed products from two manufacturers from its shelves.

While proponents of vape products argue that vaping is safer than using traditional tobacco products such as cigarettes, Elenberg said it’s actually too early to tell.
“E-cigarettes generally contain less chemicals compared to traditional products like cigarettes, but since the long-term effects of vaping are unknown and not understood, there is not enough information at this time to make a determination on whether it is safer or healthier than other tobacco products,” she said.

Even if the ingestion of nicotine is deemed safer though vaping than through traditional products, nicotine itself is still a dangerous chemical, said Dr. Donald Shell, the director of disease prevention, disease management and population health policy and oversight in the Office of the Assistant Secretary of Defense for Health Services Policy and Oversight.

“Nicotine is an extremely addictive, naturally occurring toxic chemical derived from the tobacco plant that affects the nervous system and the heart,” Shell said. “Nicotine is a teratogen, as it is capable of causing birth defects. Other developmental or reproductive toxicities associated with the use of nicotine are unknown.”

While current information regarding nicotine as a carcinogen is inconclusive, Shell said, nicotine is highly addictive, and young adults and adolescents are especially vulnerable to its addictive properties.