Editor’s Note: This is the fourth and final article in the series about Patton Junior High School fall sports.

There’s football. There’s volleyball. There’s cross-country. But what about the team that’s on the sidelines cheering these teams on and spreading school spirit? It’s none other than the Patton Junior High School cheerleading squad.

“It is good sportsmanship. They cheer on the boys whether they win or lose,” said Coach Megan Byrd. “That’s a big sign of respect for each other.”

“It shows the other teams, we’re here and we’re supporting you,” added Coach Katie Geisler. “Our biggest thing, in football, when a player is down, we take a knee with (the team). It shows them the respect. If they’re taken off the field, (the cheerleaders) are clapping and cheering them on.”

Although the squad of 21 mainly cheers for football in the fall and basketball in the spring because of the way scheduling falls with other sporting events, Byrd said the cheerleaders still support other sports.

“They do a lot of pep rallies,” she said.

Just like other sports, every day after school, the cheerleaders are conditioning and running laps to keep their bodies in shape before practicing cheers and stunts.

“They use different muscles,” Geisler said. “When Calvin (Lex, Patton ninth-grader) has Allison (Geisler, Patton eighth-grader) up in the air, Calvin is using all his arm muscles and she is using all of her leg muscles at the same time, so by the end of the night, they’re sore.”

Byrd said the cheerleaders are constantly “on” during the games, too.

“They are standing up the whole entire game to where the football team, if they aren’t in, they can sit,” Byrd said. “(The cheerleaders) can’t do that.”

Physical stamina and endurance are not the only things the cheerleaders are learning.

“They have to learn to be in control of themselves, and it is a responsibility,” Byrd said. “They have to have their bloomers, their shoes, their socks, bows, and if they don’t have any part of the uniform, they don’t cheer.”

Geisler said the cheerleaders are also learning about trust.

“When the girls and the boys are stunting, they have to have that trust in ‘He’s not going to drop me,’” Geisler said.

Lex, team captain and yell leader, said the bond of trust is one of the things he has learned most from cheerleading, but also organization and teamwork.

“We have to make sure everyone is in sync with each other,” Lex said, “and you really do form a bond of trust with everyone. … I like being part of this group.”

Patton eighth-grader Karly Byrd said cheerleading has brought her out of her shell.

“It gives me the independence to be myself instead of following in someone else’s shadow,” Byrd said. “I’m very shy, so this gives me a time to let myself be who I actually am instead of the shy person.”

Allison Geisler, a former gymnast, said cheerleading has taught her how to be on a team.

“I’m more of an independent person. I like to do things myself,” Allison Geisler said. “(Cheerleading) has been teaching me how to work as a team because teamwork is the dream work.

“(Cheerleading) is pretty fun,” she said. “It has a lot of movement involved, and it is nice to go and support my school at sporting events.”

So, whether the Patton Tigers are “so cool” or it is time to play “D-E-F-E-N-S-E,” the Patton cheerleading squad will be there showing their support. 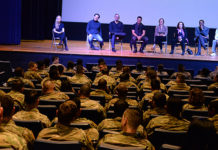 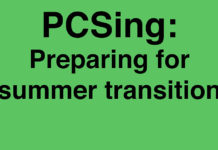 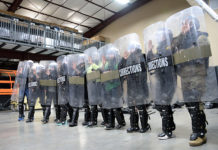