As HBO Max prepares to launch later this year with the full Friends library as one of its crown jewels, the much-anticipated Friends reunion special that fans are desperate to see remains elusive.

At the Television Critics Association winter press tour on Wednesday, Kevin Reilly, chief content officer of the upcoming HBO Max streaming service (as well as president of TNT, TBS, and TruTV), was asked about the status of the in-development unscripted Friends cast reunion, which was first rumored in November.

“There’s interest all the way around, and yet we can’t seem to quite get that interest sort of all aligned to push the button on it,” Reilly said. “So today, unfortunately, it’s still a maybe.”

The biggest challenge, according to Deadline, is that producing studio Warner Bros. and the six cast members have reached a standstill in contract negotiations. If the parties ever agree on compensation, there’s still the issue of getting the cast members’ schedules to align. They have reunited as friends, but not as Friends, as recently as October, to take a photo that Jennifer Aniston posted on Instagram. And they will never revive the show, according to creator Marta Kauffman. But keep your fingers crossed that they’ll be able to make an HBO Max reunion happen.

Friends will be available to stream on HBO Max when the service launches in May.

The Best Apocalypse Shows and Movies to Stream 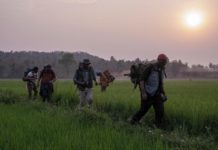