The U.S. Air Force was officially established on Sept. 18, 1947, but its roots stretch much further back, before World War I to 1908, when the Wright Brothers demonstrated their invention to the Army.

Gen. Billy Mitchell called for a separate service and he is now known as the “Father of the U.S. Air Force.” The seeds of American air power were possibly planted at Fort Leavenworth.

Lt. William Mitchell arrived at Fort Leavenworth in 1904 with new wife Caroline and took up residence at 20-B Sumner Place, according to a post directory.

Mitchell had a busy year at Fort Leavenworth in 1905, and not just because the Signal School was established in September. He kept his troops busy practicing cavalry drills, telephone construction, field line building and night signaling, along with the soldiers’ regular Army responsibilities and care of their horses. It is little wonder that Company A was, for a time, considered the best Signal company in the U.S. Army.

That same year Mitchell was in charge of fireworks at a celebration of the Signal Corps. He and his wife also led the grand review.

Two nights before the fireworks, the Signal Corps held its first formal ball in the gym. The building was decorated with a signal light onto which a piece of colored paper with a moon shape had been cut, and the paper placed on the light, throwing a large moon shape across the room. This design fitted the motif of “Moonlight Waltz,” which was a new dance reported to have been most popular with the officers and their guests.

Mitchell was presented with a small medal from the Signal Corps Athletic Association as an honorary member. That same year, Mitchell and others organized the Independence Day festivities.

His wife took painting lessons, frequently went on walks to call on other wives, hosted a card party for more than 50 guests, and hosted brother-in-law John on visits. Near the end of summer, Caroline had a bad fall from her horse and required stitches to one ear. Their first daughter, Elizabeth, was born here.

Mitchell also enjoyed keeping up on world events and expressed concern over the future of Japan’s military and predicted that war with Germany was inevitable.

He somehow found time to work with an enlisted man, Cpl. Thomas King, and took an interest in the “King kite” (see article in the Feb. 27 issue of the Fort Leavenworth Lamp). King was a photographer in the Signal Corps and a young inventive genius. Trying to find a way to take aerial photos, King found himself part of a group with Mitchell, Maj. George Squire and Mitchell’s Company A of the Signal Corps, out on both parade fields sending his kite up in all weather to experiment with wireless communication.

Always thinking years ahead, Mitchell desired a quick way to get the kites and telegraphy equipment set up. Wire had been laid out by hand, but here at Fort Leavenworth, Mitchell invented a spool cart that could be used to lay wire by horses. A blurred few photos exist that are important moments in the fort’s history.

The Army gave the Signal Corps a 20-horsepower Cadillac for use in the field. It is not known if the cart was hitched to the Caddy for a test run, but Mitchell mentions the car in a lecture he gave in 1905, a copy of which is digitized at the Combined Arms Research Library. He felt that the automobile would be invaluable if lines were cut and a message needed to be sent quickly. In one insightful moment, he wrote that out of steam, electric and gasoline, the gas-powered engine was most practical.

Also on post at the time was an officer named Benjamin Foulois. The opposite of Mitchell, Foulois was short, quiet and more comfortable in work clothes than any uniform. He wasn’t the best student at the school either; when told he would have to wear glasses or suffer poor grades, he chose the latter. He could see well enough to be involved in sports, and preferred tennis and baseball, playing second base for the post team. For a time, he also resided on Sumner Place.

Despite their differences, the two men had one major interest in common: aeronautics. After Foulois finished Signal School, he was sent to work in the Office of Chief Signal Officer Brig. Gen. James Allen in the Washington, D.C., area. In the fall of 1908, he went to Saint Joseph, Mo., to pilot the Army’s “Baldwin Balloon,” also known as “Signal Corps Dirigible No. 1,” the first aircraft bought by the Army.

In 1925, Foulois, now a lieutenant colonel, testified with Mitchell about what they saw as dangerous incompetence from the Army and Navy, but their shared interest seemed to end there. There was an animosity between them that possibly went as far back as their Fort Leavenworth days. When Gen. John Pershing put Foulois in charge of the Air Service instead of Mitchell, it only made their rivalry worse.

A lecture given here by Mitchell in 1906 had a long and tedious title: “The Signal Corps with Divisional Cavalry and Notes on Wireless Telegraphy, Searchlights, and Military Ballooning.” That lecture established the Army’s legacy in air history.

It was here, even before the establishment of the Aeronautical Division of the Signal Corps, that Mitchell, for the first time, openly predicted aircraft playing a major part in war.

After a stint in the Philippines, the Mitchells had their second baby here in 1909 and lived at 211-A Pope Ave., which is now 215 Pope Ave.

While the Leavenworth Times commented on new words in the English language, including “aviator,” “biplane,” and “hangar,” Mitchell was, in 1912, the only Signal officer to be chosen for a spot on the General Staff.

Before 1920, he predicted, “air forces will attack centers of production of all kinds, means of transportation, agricultural areas, ports and shipping…” He foresaw the use of the airplane to cut off the industrial means of wars.

In the 1920s, bigwigs in Washington called Mitchell’s statement that Japan would attack Pearl Harbor from the air a “crystal ball” prediction. He would not live long enough to see his prediction come true, but his incredible foresight concerning the future of aviation was planted more than 100 years ago on the grounds of Fort Leavenworth. 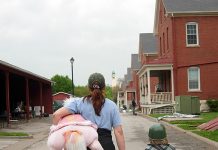 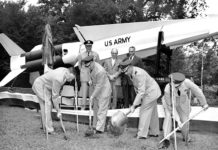