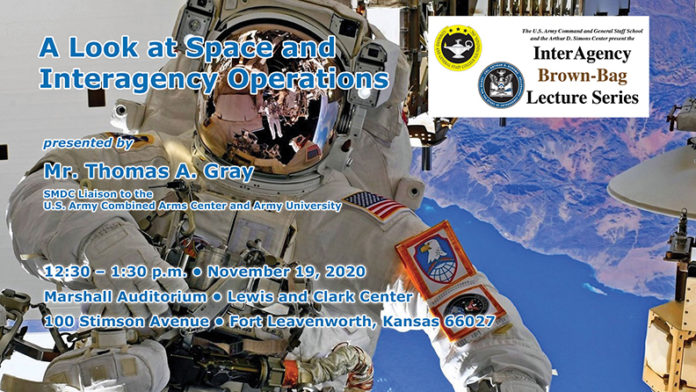 The second presentation of the InterAgency Brown-Bag Lecture Series for CGSC academic year 2021 will be conducted at 12:30 p.m., Nov. 19 in the Lewis and Clark Center’s Marshall Auditorium.

Gray is responsibile for the integration of space knowledge and education across various U.S. Army Training and Doctrine Command, joint and other service schools, including the U.S. Army Command and General Staff College.

A retired U.S. Army officer, Gray was one of the first officers selected and designated as a space operations officer. He served in Army Space Command, the Space and Missile Defense Lab, and the U.S. Army Space and Missile Defense Command’s Directorate of Combat Development. He is qualified as a Level 3 Space Professional of the U.S. Army Civilian Space Cadre, holds the space operations officer designation 3Y, and has earned the U.S. Army Master Space Badge. Gray holds a bachelor’s from New Hampshire College and earned a master’s from Central Michigan University.

The InterAgency Brown-Bag Lecture Series is co-hosted by the CGSC Foundation’s Arthy D. Simons Center for Interagency Cooperation and the Command and General Staff School. The series is an extracurricular, interagency topic-focused series that is intended to help enrich the CGSS curriculum.

Normally, the lectures in the InterAgency Brown-Bag Lecture Series are free and open to the public and, as the series moniker suggests, attendees are welcome to bring their own lunches into the conference room. Unfortunately, because of COVID-19 restrictions, members of the public cannot attend the lecture and food and drink are not allowed in the auditorium.
For those unable to attend, the presentation will be recorded and later posted on the CGSC Foundation’s website, YouTube channel and Facebook page.