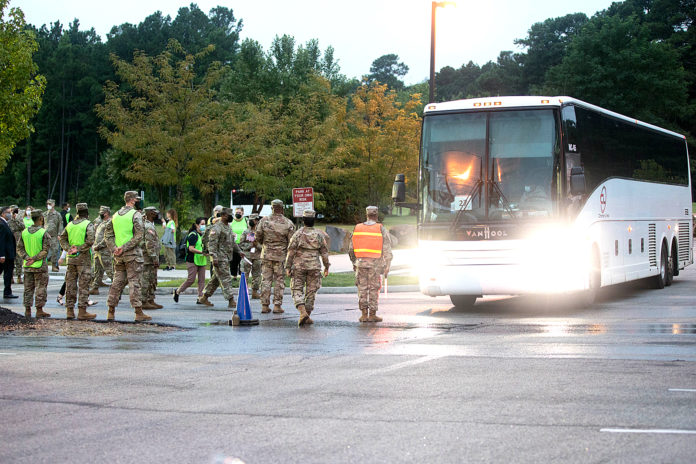 The augmentees typically coach senior-level headquarters staffs on military planning and operations during military training exercises orchestrated by Training and Doctrine Command. They used this experience to support the planning and management of the complex task force mission.They arrived one week before the installation had to be ready to support the State Department by providing temporary lodging, medical screening and processing for up to 3,500 Afghan special immigrant visa applicants.

Their team had to quickly integrate into the task force, applying their skills and experience to help plan and build the capacity the State Department needed to house and process the Afghans for immigration into the United States.

“The speed at which the MCTP soldiers deployed and integrated with our team was critical to our ability to prepare for the mission,” said Maj. Gen. Mark Simerly, Task Force Eagle, Fort Lee, and the Combined Arms Support Command commanding general.

“They rapidly assumed primary roles in the planning and execution of the operation and became a critical component of our overall success.”Less than a week later, service members and staff members from multiple government and non-governmental organizations collaborated on Fort Lee to support the mission. Right before the first flight of the Afghans arrived in the U.S., the support and processing areas were established and prepared to process the pending arrival of the visa applicants.

“It was amazing to see how quickly everything came together,” said Maj. David Vasquez, an MCTP engineer officer who de-ployed to support planning. “We all had to come in hard and fast and do everything we could to help prepare the task force to support this critical mission.”

Vasquez highlighted personal reasons why he and his team were dedicated to their mission.

“A lot of us served in Afghanistan and worked with Afghan interpreters and others who supported our mission,” Vasquez said. “These people and their families put them-selves in as much danger as we did, and I’m glad to be part of this effort to help keep them safe.”