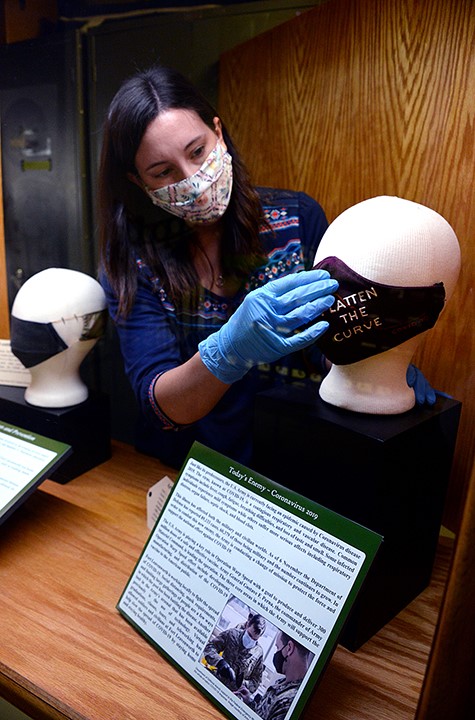 “Army’s Oldest and Deadliest Enemy” featuring the cholera outbreak of 1866, the Spanish influenza of 1918 and COVID-19, is the newest exhibit that was installed Nov. 16 at the Frontier Army Museum.

“I wanted to do an exhibit about COVID-19 since it’s relevant and the Army is tied into it, but I didn’t want to just only talk about coronavirus,” said Megan Hunter, museum specialist. “I also wanted to talk about the history of the Army and its relationship with disease because, since the formation of the Army, one of the biggest things they have had to battle was disease.

“Before the 20th century, more soldiers perished from disease than actual battle wounds,” she said.

Hunter said she chose to feature cholera because it mostly effected the Frontier Army.
“Fort Leavenworth got hit multiple times with cholera just being a depot and people coming in,” Hunter said.

Spanish influenza was an obvious choice for the display, she said.

“When people think of pandemics or epidemics, they usually think of the Spanish flu,” Hunter said.

The Spanish influenza originated in Haskell County, Kan., and some of its first outbreaks were at Fort Riley and Fort Leavenworth.

“When I was doing research on (the Spanish flu), it was kind of interesting to see how many people were affected, both Army and civilian, in the United States — 675,000 people perished from the Spanish flu, and today (with COVID-19), we’re a third of the way there.”

Like now, Fort Leavenworth was just as much as an educational spot in the 1900s when it came to learning as much as possible about the disease.

“The Sanitary Field Service School was here during World War I and essentially their job was to train (noncommissioned officers) to properly take care of their troops’ health,” Hunter said.

“This little book here from 1914 has a whole description on how to recognize disease to … how to prevent it,” Hunter said. “They had all these great details of essentially how to keep your camp healthy from what they knew at the time.”

Hunter said, like today with COVID-19, to combat the spread of the Spanish influenza schools were closed, social gatherings were discouraged and people wore face coverings, but this time, with COVID-19, the Army is playing a bigger role in the effort.

“History doesn’t repeat itself, but it rhymes,” Hunter said. “Previously, the Army has worked with the civilian world when it came to vaccinations and things like that, but this is the first time where the Army is heavily in the forefront.

“Army General (Gustave) Perna, the commander of Army Materiel Command, is actually leading the charge,” she said. “The Army is at the forefront of development and the manufacturing and execution of everything.”

Hunter also included local efforts, particularly the manufacturing of face coverings by local Army personnel and civilians. On display is an example of the first masks made at the U.S. Disciplinary Barracks and the mask deemed most artistic following a face covering design contest among Munson Army Health Center employees in April.

The displayed MAHC mask was designed and made by Edith Cotton, MAHC medical staff manager. The mask features MAHC’s crest and motto “Constant Dedicated Care” and the slogan “Flatten the Curve” to represent the efforts made by medical professionals at the start of the pandemic to slow the spread of the infection in order to not overwhelm the healthcare system.

“The mask I designed was to honor the healthcare professionals and civilian staff at Munson Army Health Center who were doing their part in the fight to lower the number of coronavirus cases in our community,” Cotton said. “In the 25-plus years I’ve worked at Munson, the motto ‘Constant Dedicated Care’ clearly defines what the staff stands for. Munson staff members were dedicated in their efforts to ‘flatten the curve,’ hopeful that there would be a decrease in the number of diagnosed coronavirus cases.

“I am truly honored that the mask I designed will now be a permanent artifact in the Frontier (Army) Museum. It is amazing that something I created will now forever be a part of history,” she said. “It fills my heart with joy to know that people like the mask I created, and hopefully it is a reminder of the importance of wearing a mask in our ongoing battle to flatten the curve.”