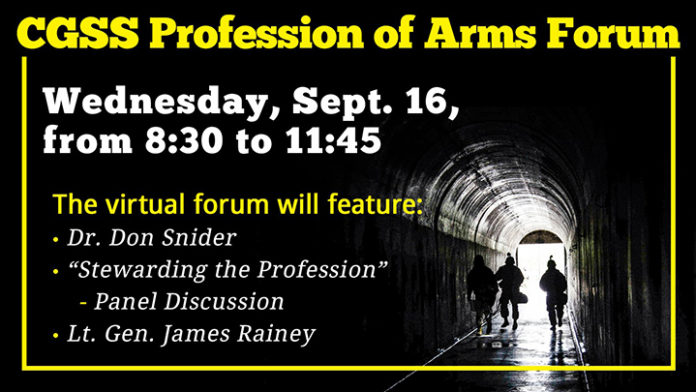 The Command and General Staff College conducted the annual Profession of Arms Forum Sept. 16 using virtual technology to deliver the speakers and panel discussions to individual classrooms allowing the college to avoid a large gathering in the Lewis and Clark Center’s Eisenhower Auditorium.

Dr. Don Snider, speaking from the Army War College’s Strategic Studies Institute, kicked off the forum with a discussion of the profession of arms and Army ethics. He reminded the Command and General Staff Officer Course students that professionals have a deep moral obligation to their clients and police themselves.

He also said the profession of arms is a lifelong calling and defined a calling as meaning “my work is more important than I am. The profession of arms is immensely demanding,” he said.
Snider retired from the Army’s Center for the Army Profession and Ethic in 2016 after serving 53 years in the Department of Defense as an Army officer and a civilian. He taught at the U.S. Military Academy at West Point, N.Y., and later at the Army War College and was the second civilian to be named professor emeritus at West Point.

The panel members spoke about the issues currently facing the nation and the Army and reminded the students they are the hope for the future. Wagner told students to take the opportunity to understand the challenge our Army has today and reminded them it is not all that different from previous times. He spoke about his father integrating an all-white unit in the 1950s, the military reaction to the unrest following the Rodney King verdict in 1992, and today’s social unrest.

Bingham reminded the audience “as Army officers, we are apolitical.”

But as leaders they are charged with modeling correct behavior.

“Take charge and be the standard bearer,” she said.

Miller said students shouldn’t get bogged down in managing or assessing their career paths.

“Work hard on the things you’re assigned to do and let the future take care of itself,” he said.
Klein said she often refers to the works of ethicist Rushworth Kidder, who challenged readers to exercise their “moral muscle memory.”

Finally, Lt. Gen. James Rainey, CGSC commandant and commanding general of the Combined Arms Center and Fort Leavenworth, wrapped up the open sessions with a short talk and lengthy question and answer discussion with students.

“Talking about the profession is the most important thing we’re going to do during your year at CGSC,” Rainey said.

He also said his talk would focus on the three requirements of the profession – Character, Competence, and Commitment.

Following the formal presentations, students met with their staff groups to discuss the topics presented.