“Our profession is defined by our ethics, values, standards, code of conduct, skills and attributes,’” Funk quoted. “‘It’s incumbent on us to hold ourselves to a higher standard, to live the Army values, to be experts in the application of armed force, and to carry out our sworn duty to protect the freedoms guaranteed in our Constitution through the ethical and just application of force.’”

Funk said he considers the defining element of the profession of arms to be trust.

“Trust is essential for the profession of arms. It is the bedrock, the foundation upon which our profession is based,” Funk said. “Why is the military the most widely respected institution in our country? It’s trust. Why will soldiers willingly advance into harm’s way when one of their leaders tells them to do so? Trust. Why do we as leaders have the confidence to move forward, to attack, with only the belief that our soldiers will follow and that our peers on our right and left will be there to cover our flanks when we need them? It’s trust. Trust is not given, it is earned. It is born from mutual sacrifice. It is born from setting the example. It is born of action, not words.”

Each panelist answered the question “How has the profession of arms changed?”
Kolasheski said he believes the profession is based on five things — trust, honorable service, military experience, stewardship and esprit de corps, which have not changed. What has changed is the operating environment and the demands put on soldiers, he said.

“Focusing on the idea that military service is a professional activity became a common non-sectarian way of articulating the moral basis of military service,” Cook said. “The professional has an obligation to be anticipating changes in the environment and foreseeing and preparing continually to meet those new challenges.”

“Officers can have great courage, competence, and commitment, but if your Noncommissioned Officer Corps is not helping you implement that, then it’s almost wasted words,” he said.

Snider, one the authors of much of the Army’s professionalism doctrine and literature, said his biggest career challenge was to make and to keep the Army a profession and not let it lumber along as a big government bureaucracy.

First, “You’re not a profession because you say you are,” he said. Second, bureaucratic tensions exist between the profession of arms and the Army’s tendency to be a lumbering bureaucracy. Third, “what will determine if the units that day will behave as a bureaucracy or a profession? Army leaders. Every day leaders have to leverage; they have to wrestle bureaucratic tendencies into professional tendencies.”

On the second day, Cook was back talking about “Just War: Strategy and Ethical Considerations” with fellow panelists Lt. Gen. Charles Pede, the Army judge advocate general; Dr. Brian Orend, professor of philosophy at the University of Waterloo in Waterloo, Canada; and Dr. Pauline Shanks Kaurin, professor of military ethics at the U.S. Naval War College in New Port, R.I.

Pede said the ability to wage just war is restrained by two things: fighting a counterinsurgency war that has limited how war is conducted and the legal maneuver space. This is an external threat that attempts to control the use of various weapons and methods according to humanity or public opinion, not according to international law.

Cook said the international system has no natural shape. When there is order, it is by agreement. Now, other cultures are pushing back on a system that was largely created to deal with a European and Christian environment.

“The conversation the world needs to have now is radically cross cultural,” Cook said.

“The way I like to see just war is it’s a middle ground tradition between two extremist perspectives,” Orend said.

One extreme is pacifist and the other is a no-holds-barred pure, realistic, strategic, national selfishness, he said. “Even though the challenges to just war theory and our ability to conduct just war are real and potent, it’s important to keep in mind the need for that middle ground — that big, messy, complex middle ground.”

“I think of just war theory as a mode of deliberation, a way of thinking about and having conservations on when war is just, how one might conduct war, and what happens after war,” Shanks Kaurin said. “I think how you navigate that is having people who have professional judgment and discretion. That’s a piece of what I call ethical leadership.

“You aren’t just members of the profession,” she continued, “you are now about to cross over into those that hold the profession, that will keep its traditions and norms, that will mold and change the profession as that is required. As the holders and molders of your community of practice, you need professional discretion to know when to keep things and when they have to change. And, that includes your engagement with just war thinking or just war traditions.”

Jim Collins, author “Good to Great” and “Turning the Flywheel,” then talked about developing great organizations. Although his talk was not for attribution, it was based on the concepts in his best-selling book “Good to Great.”

Lt. Gen. Michael Lundy, commanding general of the Combined Arms Center and Fort Leavenworth, closed the forum. He challenged the students to consider how to continue to evolve the profession and reminded them that they are the next set of stewards of the profession.

Lundy said he considers intellectual curiosity to be a key leader asset.

“That’s what it’s all about — the competence, character and commitment of our leaders and soldiers,” Lundy said. “That’s where you spend most of your time.” 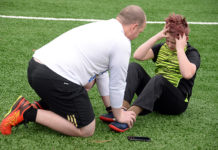