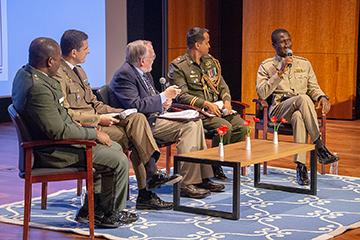 Four Command and General Staff College international students spent an hour sharing their international peacekeeping experiences with members and guests of the Greater Kansas City Chapter of the United Nations Association Sept. 24 at the National World War I Museum and Memorial in Kansas City, Mo.
The international officers from Bangladesh, Ghana, Liberia and Spain demonstrated not only their knowledge and expertise in peacekeeping, but also the high quality of international students attending CGSC.
Mike Wood, of the United Nations Association, moderated the Peacekeeping Missions and Operations Panel. Wood said there are 124 current U.N. peacekeeping operations involving more than 100,000 military personnel worldwide. He then introduced the panel members Maj. M.D. Sajibul Islam of Bangladesh, Maj. Daniel Atobrah Bondah of Ghana, Maj. Nathaniel Waka of Liberia and Maj. Carlos Vazquez of Spain.
Islam was the first to speak, telling the audience about his experiences in peacekeeping in Ivory Coast in 2014 and 2015. He said the mission he was on came late in the U.N. involvement in Ivory Coast. The dividing line that had once separate competing forces had already been dissolved and the nation was on its way to recovery.
“The U.N. mission in Ivory Coast can be considered one of the most successful U.N. missions in African countries,” he said. “Like many African countries, the conflicts are political and at the same time they’re linked to various tribes striving for supremacy.”
Bondah told the group that he was in Liberia in 2004, 2007 and 2014.
“If you have been in a peaceful atmosphere all your life you would not appreciate what peace is until you see a country devastated to the point it was when we entered Liberia. There wasn’t a single house, a single structure that did not have a bullet hole in it,” he said.
He said humanitarian activities could not be conducted because the situation was so volatile.
“We had to secure the area before the humanitarian assistance could reach the civilians who we are supposed to protect,” he said.
Very quickly the situation took on ethnic — Mandinka versus indigenous populations — and religious — Christian versus Muslim — dimensions. The situation went from peacekeeping to near war, Bondah said.
In the 10 years between his first and last missions to Liberia, the country improved greatly, he said.
“Liberia is one of the success stories of the United Nations,” Bondah said. “Liberia would not get to where it was today if it was not for the United Nations.”
Bondah said when he first entered Liberia there were no schools, hospitals, or markets. Everything was broken down and destroyed. Within 10 years, improvement could be seen coming to all these sectors, he said.

Waka said he lost siblings in the fighting in Liberia when he was a boy. He and his mother were rescued by peacekeepers in Liberia in 1990. He said that is one reason he later joined the Army and a big reason he volunteered for the nation’s first peacekeeping mission since 1960.
“Our commander-in-chief, President Ellen Johnson Sirleaf, said after 15 years of peace it was time for us to pay it back,” he said.
Waka was a platoon commander for Liberian troops that deployed to Mali in 2013 and worked under the command of the Nigerian battalion. Coincidently, it was Nigerian troops who rescued his family in Liberia.
“Mali is one of the most dangerous U.N. missions,” Waka said.
As director of peacekeeping missions for Liberia, Waka said he continues to monitor the mission and visited Liberian troops there last year.
Vazquez was the final panelist to speak. The Spanish helicopter pilot said he first deployed to the U.N. mission in Lebanon in 2008 and returned in 2018 as the coordinator of military-civilian cooperation projects. He said over 10 years he could see improvement in security, government and development.
“The situation is improving,” Vazquez said. “It’s difficult to foresee an end to the mission.”
The difficulty arises because of the complexity of Lebanon, he said.
“Lebanon is small, but it has 18 religions, several diverse groups and somehow it reflects all of the issues on the Middle East,” he said.
Still, he noted, the U.N. mandate is to confirm the withdrawal of Israeli troops from Lebanon, establish security in the country, assist the government of Lebanon to expand their influence in the country and assist the Lebanese armed forces in their fight against armed groups.
A question-and-answer session followed the officers’ presentation. When asked if peacekeeping was a proper job for the military, Islam quoted the second Secretary General of the U.N. Dag Hammarskjöld who said, “Peacekeeping is not a job for soldiers, but only soldiers can do it.”
Bondah brought the discussion to a close saying, “There is no situation that is beyond repair when it comes to peacekeeping. Everything is possible. We are always able to bring humanity back.”
He then quoted John Lennon, “Peace is not something you wish for. It is something you are, something you make, something you do and something you give away.”