Col. Charles Lombardo officially assumed responsibility as the deputy commander of Combined Arms Center-Training during a ceremony July 1 at the Frontier Conference Center.

“But you’re ready for this,” Rainey said.

Rainey credited Lombardo’s combat tours as well as his time with the Training and Doctrine Command early in his career with preparing him for the job at CAC-T. Lombardo served as the aide de camp to the TRADOC commanding general and a few years later was a special assistant to the TRADOC CG.

Lombardo is no stranger to Fort Leavenworth either, having attended the Command and General Staff College in 2005. In 2014, Lombardo completed his senior service college as an Advanced Strategic Leadership Studies Fellow at the School of Advanced Military Studies and then served as a SAMS seminar leader from 2015 to 2016.

“The girls and I are ecstatic to be back,” Lombardo said referring to his wife and daughters in the front row. “Glad to be back home.”

Lombardo said that being a soldier and being able to continue to serve with soldiers is a blessing.

“To be given this honor at the best post in the United States Army is a blessing beyond my wildest dreams,” Lombardo said.

Lombardo said CAC-T is the connective tissue that binds the task of developing leaders to master their craft and help the Army rebuild its core competencies in large scale combat operations.

“CAC-T affects every echelon of command and its relevance is not measured in its proximity from the battlefield,” Lombardo said. “If you are fighting and winning in our Army today, CAC-T is providing you the training support system.” 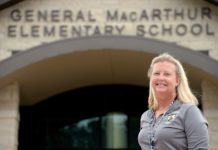 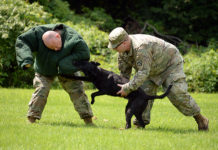 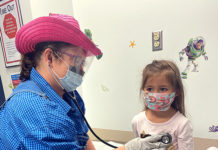